Hollywood, CA – Do you know what programming language will be used for artificial intelligence in the Year 2150?

According to TV science fiction drama The 100, the answer is Julia.

The 100 tells the story of a post-apocalyptic Earth shaped by artificial intelligence.

In Season 3, Episode 12, Raven Reyes, performed by Lindsey Morgan, discovers code that enables her team to access A.L.I.E. 2.0, the latest version of the most important artificial intelligence program in the world.

A screenshot reveals that the crucial code is written in Julia and copied from the Julia language repository on GitHub.

According to Viral Shah, co-creator of the Julia language and CEO of Julia Computing, “The 100 staff did their research. It makes sense that they would use Julia to represent the language of artificial intelligence in 2150. Today Julia is being used to guide self-driving race cars and diagnose serious medical conditions. Julia is the most expressive and most powerful language for artificial intelligence today, and based on current growth, this trend will continue to accelerate in the months and years ahead.” 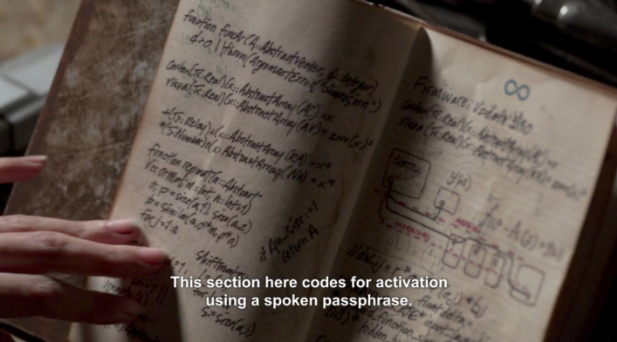 The 100 is not the only Hollywood television program featuring Julia.

Julia also made an appearance on Casual, season 3, episode 5. During this episode, the lead character, Alex, interviews for a Chief Technology Officer position at a technology startup company. “The people we meet your age,” the interviewer says to Alex, “they’re not versed in the newer languages: Swift, Julia, Google Go.”

Shah explained, “The character interviewing Alex in Casual hasn’t had quite enough experience with Julia programmers. While it’s true that Julia adoption has exploded among young people – especially at universities and at fast-growing companies including Amazon, Apple, Facebook, Google and Uber – data scientists and researchers with decades of experience are also flocking to Julia to take advantage of Julia’s superior performance and easy-to-learn syntax. Examples include Nobel Laureate Thomas J. Sargent who describes himself as a “walking advertisement for Julia,” and the engineering manager at a major US industrial firm who wrote to tell us:

“I just wanted to thank you for Julia. I am the manager of an engineering group responsible for quite a few numerical tools from stand-alone small programs to full-blown finite element codes. Julia is the most exciting thing I've seen in years. When a language is cool enough for a 50-something year old manager to spend his spare time programming in it at home, you know that you've kindled serious excitement.”

Julia is the fastest modern high performance open source computing language for data, analytics, algorithmic trading, machine learning and artificial intelligence. Julia combines the functionality and ease of use of Python, R, Matlab, SAS and Stata with the speed of C++ and Java. Julia delivers dramatic improvements in simplicity, speed, capacity and productivity. Julia provides parallel computing capabilities out of the box and unlimited scalability with minimal effort. With more than 1.2 million downloads and +161% annual growth, Julia is one of the top programming languages developed on GitHub and adoption is growing rapidly in finance, insurance, energy, robotics, genomics, aerospace and many other fields.

Julia Computing was founded in 2015 by the creators of the open source Julia language to develop products and provide support for businesses and researchers who use Julia.